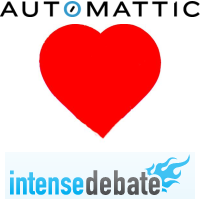 What an interesting news day! Everyone knew that the gPhone was being announced, but that is not what I am talking about today. At the TechStars demo day, it was announced that Automattic acquired IntenseDebate. This was unexpected. It is also news that creates a very interesting situation, because Disqus, the other major blog commenting service, has had a good amount of success working with WordPress. Obviously, Disqus must be concerned. I asked Daniel Ha of Disqus whether he had any concerns about it:

WordPress has done a good job on maintaining an open platform for developers to add functionality, regardless of an in-house offering. I think Disqus is currently the best discussion system on any platform, and I’m confident we will continue innovating enough to maintain that position.

At various points this summer, people had been wondering whether WordPress would build a similar commenting system themselves. WordPress 2.7 is supposed to have comment threading when it is released as well. Matt Mullenweg talked about the purpose of the acquisition:

Long-term, I think that comments are the most crucial interaction point for blogs, and an area that deserves a lot of investment and innovation. Comments really haven’t changed in a decade, and it’s time to spice things up a little.

Basically, they realized that it would be much harder to build something like Disqus or IntenseDebate compared to just purchasing one of the services. Obviously, the big question is whether IntenseDebate becomes the default blog platform for WordPress or whether it is a more advanced commenting option. Toni Schneider, the CEO of Automattic, does hint at some of the future for WordPress commenting:

ID will remain a stand-alone service that can be used with WordPress as well as many other types of web sites (similar to the way we run our Akismet and Gravatar services). In addition, some ID features and technology will be built directly into future versions of WordPress and Gravatar.

This does seem to provide an interesting dilemma for the IntenseDebate competitors. If some of these features are being integrated into WordPress, what would be the point of using a third party service like JS-Kit? Is this the just the first purchase in the blog commenting space? Will Disqus be purchased by Google and integrated with the Blogger service? Daniel Ha has maintained that he would like to keep Disqus as an “independent third-party service that plays well with all platforms”. However, he did leave a little tease for people expecting more:

I can’t speak to any specific partnerships right now, but there’s a lot of news coming that will significantly Disqus’ reach.

The only problem that I have with this purchase is that IntenseDebate has decided to go back into private beta. So any new installations will require an invite code. My guess is that they will not have any new installations until they are running on WordPress hardware. Hopefully this type of delay does not eliminate any momentum they could have gotten from the acquisition announcement. I am looking forward to the competition that this will likely spur.